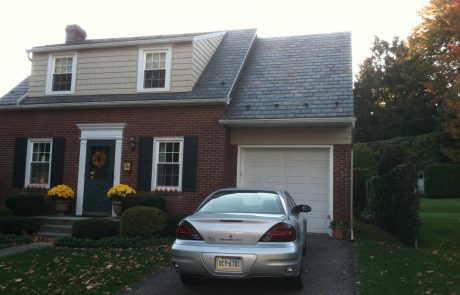 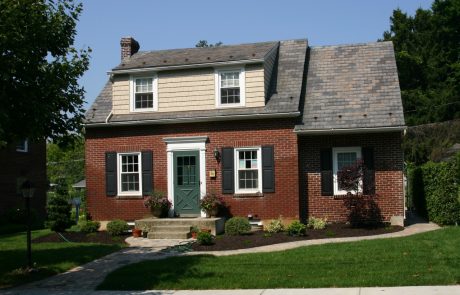 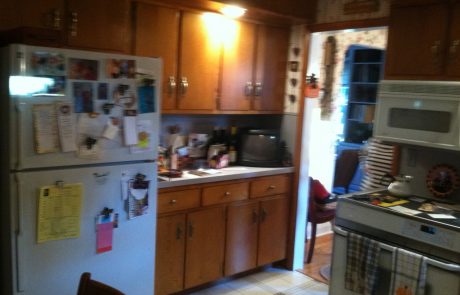 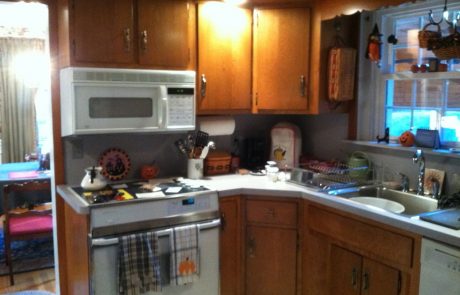 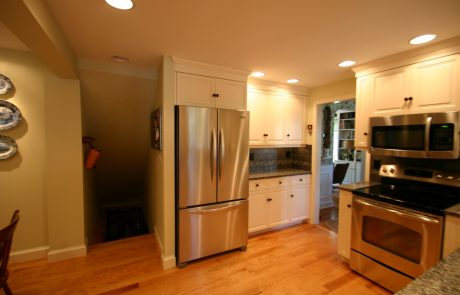 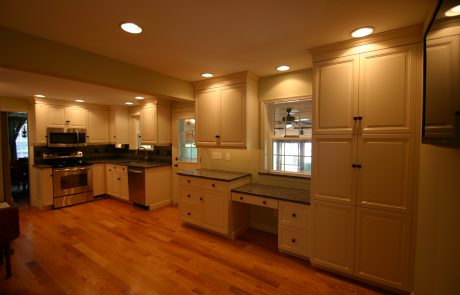 Most of today’s kitchen remodels feature granite countertops, tile backsplashes, under-cabinet lighting, and stainless-steel appliances. However, there is more to a kitchen than fancy cabinets and expensive stone. Our project puts the typical kitchen remodel in a unique situation that ultimately changes the look of the entire home.

The customers’ home is a 1940’s Cape Cod with a 100 square-foot kitchen and a small narrow attached garage. When the customer called us to enlarge their kitchen, we immediately saw the garage as a way to enlarge the kitchen. However, there were two problems with this concept. A concrete block and brick wall separated the two spaces, and closing off the front facing garage door never looks good on the front façade. Add the logistics of maintaining a useable kitchen for the duration of the project, and you can see this is not a typical kitchen remodel.

The first step was removing the tons of masonry between the kitchen and garage. A temporary wall was built in the kitchen, covered in plastic, and sealed shut. We then induced positive airflow to the dining room to push all the dust from demolition out the garage door. HEPA filters in the kitchen made dust non-existent. Both floors above had to be temporarily braced up while we jack hammered away the wall and wheel-barreled debris through the garage door to the dumpster in the driveway. After the mess was cleared up we installed an engineered beam to carry the load.

We drove around the neighborhood looking at other house that had garages converted into living space. White vinyl siding and a vinyl window seemed to be the norm. In a city block of brick Cape Cods and bungalows, vinyl really degrades the look of the house. We decided we wanted to totally remove any sign of a garage on the front of the house and make it look like there was never a garage on the house when it was built.

We completely removed the curb, apron, sidewalk, and driveway from property line to property line. Then we installed new curb and concrete sidewalk with pavers to the front porch, curving through the old driveway to the rear of the home. The entire front of the house was re-landscaped with flowerbeds and new sod.

We closed off the overhead door by matching the 60 year old brick and mortar, ordered the same size window that is on the first floor of the home, custom-built a wood frame and brick mold to mimic the original, and wrapped it in white aluminum to match the others on the front of the house. The last detail was a set of matching shutters with hidden fasteners.

Working in the existing kitchen required some planning to make the old and new blend well. One of the problems we encountered was that we couldn’t begin working until the homeowners finished breakfast and had to be finished just in time for them to make dinner. We matched up the old baseboard by building-up stock trim pieces to mimic the original. There were some areas where the cabinet base returned to the wall and intersected with the wall baseboard. Since we did not like the look of two different baseboards in a small space, we had matching baseboard milled for these areas.

Finally, we installed new hardwood floors and stained them to match the oak in the dining room, which carries the feel of the old home into the new space. The owners love the organized feel of the kitchen and realized they spend most of their time in the new room. As for the front facade, a car drove by and stopped. We could hear the passenger say to the driver, “I’m telling you, there used to be a garage in there!”