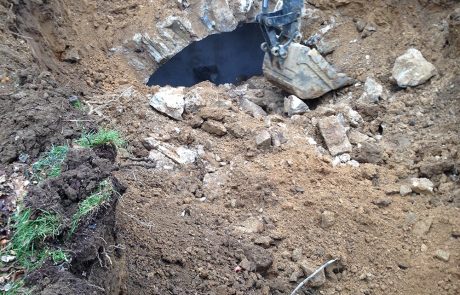 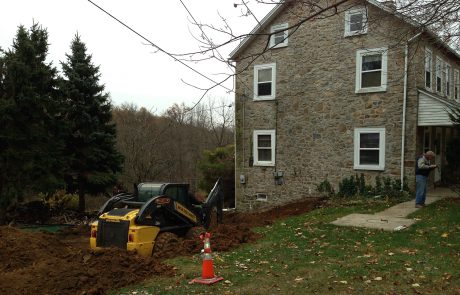 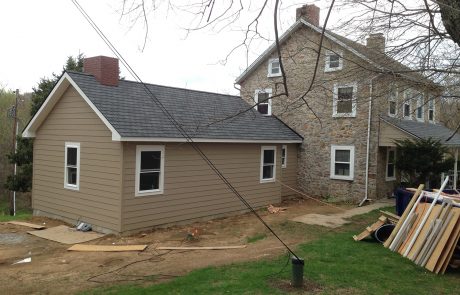 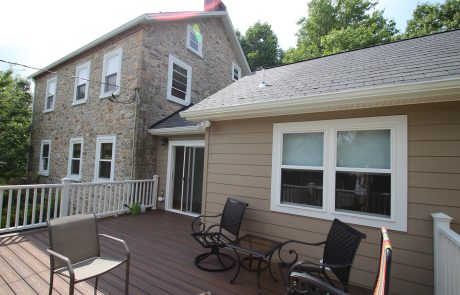 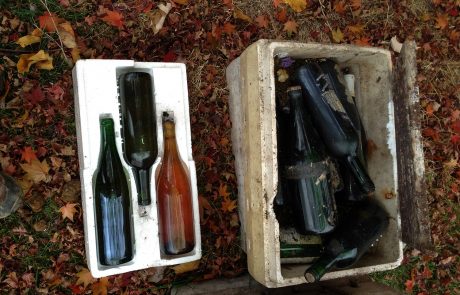 In the late 1600s, King Charles decreed the creation of a new road that is now called Kings Highway. This old stone farmhouse that was built in 1745, sits on 30 acres, originally stood on the highway. Even though the highway moved a few miles to the west over the years, the house still stands proud.

Our customers bought the abandoned house in 1959, remodeled it, and enjoyed living over the years. Now that they are getting older, they wanted a home that could accommodate them for the rest of their lives. In order to do that, they needed to add a master bedroom with an accessible bathroom. The property had everything you would expect to see from an 18th century farm: barn, spring house, wagon shed, and even its own cemetery. The one thing it didn’t have was a 19th century summer kitchen added on to it.

Summer kitchens were popular additions to farmhouses because they would give the property owners another location to cook in instead of heating up the house in the summertime. During the winter, they cooked in the basement of the home so that the heat from the fire would provide heat for the house. Since this property never had a summer kitchen, this would be our chance to add on one. Instead of creating a new kitchen, we transformed it into a master suite. It was important to design the summer kitchen so that the proportions were as square as possible, place it about 10 feet from the house, and connect it with an annex to the main house. While designing the summer kitchen, we matched the roof pitch with the old house and even installed a huge brick chimney through the roof. The chimney serves no purpose other than to make one think there was a huge fireplace inside.

Since the property has a cemetery with graves dating back to the 1730 and family decedents who still visit around Christmas time, we were very concerned that we would find an unmarked grave while digging the foundation. We contacted a local church to check the old burial records before we started digging the foundation. The church staff was helpful, and we were fairly confident that the graves were far enough away from the house. We started digging. After the excavator stripped the topsoil, we hit something hard! It was stone. We were so afraid that we would find a gravestone in the process of excavating. Fortunately, as the excavator continued to remove the dirt surrounding the stone, we saw that it wasn’t a gravestone, but it was an arch that was buried under the ground. What we learned was the stone was an old cistern that was converted into an old wine cellar full of wine! Our customer had lived there for almost 60 years and never knew there was a cistern with wine next to the house! Sadly, the stone ceiling had collapsed years ago under the weight of the dirt and most of the wine bottles had broken. My excavator took a few bottles of wine home to see if it was still good. He never reported back if it was still good to drink. Since he’s still alive, it must have been ok.

To keep the authenticity of the summer kitchen, we used cement clapboards to cover the outside of the addition instead of using wood siding like they would have done in the past. Wrapping the windows with wide trim matched up with the ones on the old home. Slateline shingles matched the color of the old slate roof so well the inspector thought it was real! Hidden out of sight on the rear of the addition, is a custom deck and patio doors leading into the annex.

On the inside, we built a powder room, bedroom, closet, and huge master bath with an awesome shower and tub. All of the rooms were universally designed for future handicapped access. The sink cabinet can be removed should someone need a wheelchair in the future. Matching wood floors flow into the old part of the home.

Even though this addition was designed to look like a 19th century building, it has high-tech features including an ultra-efficient split-system heat pump, security cameras, back-up generator, remote control electric shades, and radiant heat in the bathroom floor to keep your feet warm. It’s all ready for another 275 years!